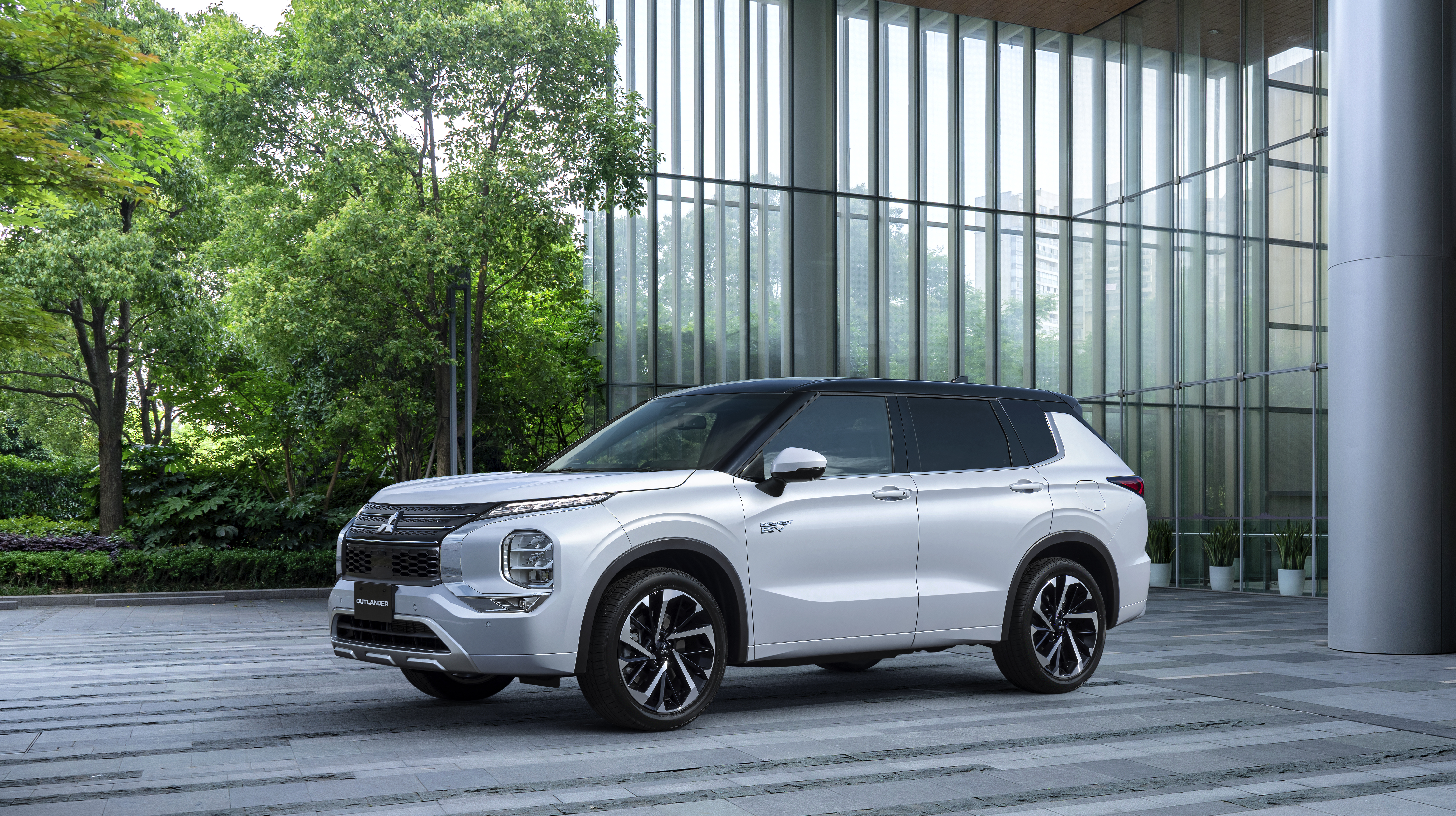 Tokyo, October 28, 2021 – Mitsubishi Motors Corporation (MMC) today premiered online its fully redesigned plug-in hybrid electric vehicle (PHEV) model of the Outlander crossover SUV. Sales will commence in Japan on December 16, followed by Australia and New Zealand in the first half of 2022 and North America in the second half of 2022.

The all-new Outlander PHEV model is MMC’s flagship model which brings together its expertise in electrification and all-wheel control technologies, while also incorporating a newly-developed platform and an array of advanced technologies. Based on the product concept of ”I-Fu-Do-Do” or authentic and majestic in Japanese, it adds a new dimension to the powerful ride, roomy interior spaces and wide-ranging functionalities expected of an SUV, along with the smooth yet powerful acceleration, and the safe, secure and comfortable ride unique to an electric vehicle (EV) in any driving conditions.

“With low CO2 emissions and environmental impact in terms of life-cycle assessment, the all-new Outlander PHEV model can be considered the best solution for carbon neutrality today,” said Takao Kato, president and chief executive officer, MMC. “With our electrification technology that delivers an exhilarating, eco-friendly ride, plus all-wheel control technology for safety and peace of mind in any kind of weather and road conditions, we are confident this new Outlander can make driving even more enjoyable and fulfilling.”

The Outlander was initially released in 20011 as MMC’s first crossover SUV. Since then, it has been rolled out globally over three generations and has become a core model in the company’s lineup, comprising approximately 20 percent of the sales volume. After the PHEV model was added to the previous generation in Japan in 2013, it was sequentially launched in regions including Europe, Oceania, North America and ASEAN, and has become a leader in the PHEV category with around 290,000 total units2 sold thus far.

Outlander PHEV was first launched in Canada in 2018 and broke new ground as the first affordable PHEV SUV to be sold in the country, and the only PHEV SUV with fast charging and 100% electric AWD. It has earned the distinction of being the best-selling plug-in hybrid SUV in Canada every year since its launch including establishing a new highwater mark for plug-in hybrid sales with over 5,000 units sold in 2018. Earlier this year an upgraded Outlander PHEV (MY21 and MY22) version was launched with greater range and a more powerful engine. Close to 14,000 Outlander PHEV units have been sold in Canada since its launch.

“A first in many ways, Outlander PHEV has shown Canadians that electrification is possible affordably and without compromise to utility.  In 2022, Mitsubishi’s 20th anniversary year in Canada, we are back with a next-generation vehicle that takes our engineering know-how in Super All-Wheel Control and plug-in hybrid technology to the next level. We’ve created a powerful combination made for Canada and our Canadian winters. We look forward to showing Canadians how we are pushing new boundaries,” said Kenji Harada, President and CEO, Mitsubishi Motor Sales of Canada, Inc.

The all-new Outlander PHEV model has been given significant upgrades all over, focusing on the following three attributes.

To further enhance its appeal as an EV, MMC has completely updated the Outlander’s PHEV components, extended its EV driving range and enhanced the exhilarating acceleration unique to EVs. With an increase of around 40 percent in the output of the front and rear motors and drive battery, the new model can keep driving in EV mode and avoid starting the engine as much as possible even when pressing hard on the accelerator, delivering the smooth, powerful and satisfying motor-based driving of high-output twin-motor 4WD. Switching to a large capacity drive battery with total capacity of 20 kilowatts (kWh) and raising the equivalent all-electric range to 87 kilometers (km, in WLTC mode. EPA range has not yet been released)4, 5 has assured sufficient driving range even when using functions such as the air conditioner, while at the same time helping to reduce the frequency of charging. An increase in the capacity of the gas tank has also expanded the total possible range when combining EV driving with hybrid driving.

The power drive unit for the front motor is newly equipped with a booster function which bolsters driving force by raising the supply of voltage to the front motor while simultaneously improving electricity consumption by raising the efficiency of the generator. Unifying the rear motor with the control unit also secured enough floor space to install a third row of seats, enabling a seven-passenger seating layout. Installing the control unit on the outside of the passenger compartment has also helped to shut out high-frequency noise for superior quietness.

Newly added innovative pedal operation mode makes it possible to both accelerate and decelerate just by controlling the accelerator pedal. The accelerator pedal alone can exert proper braking force with no need to switch to the brake pedal when decelerating6, so drivers can concentrate on steering and have more peace of mind in slippery surfaces such as snowy roads, as well as reducing the fatigue caused by switching pedals.

The S-AWC (Super-All Wheel Control) integrated vehicle dynamics control system, based on a twin-motor 4WD system with one drive motor in front and another in the rear, has a new brake AYC (Active Yaw Control) function for the rear wheels. This allows the system to distribute the driving force to the front and rear wheels optimally according to road and driving conditions, while torque vectoring by controlling the brakes on the left and right wheels is also possible for the front and rear wheels. This makes it possible to extract the maximum performance from all four tires in a more balanced manner, delivering handling true to the driver’s intention and high operating stability.

Seven drive modes can be selected depending on road surface conditions and driving style. Normal is the basic mode, optimized for normal driving on paved roads. Tarmac mode provides brisk acceleration response and high-cornering performance on dry paved surfaces. Gravel mode provides balanced operability and road handling ability on unpaved or wet paved roads, and Snow mode delivers stable vehicle behavior on snowy and other slippery roads. Mud mode optimizes tire slippage according to vehicle speed for superior road handling on muddy roads and deep trenches of snow, while also providing better ability to escape when stuck. Modes that can be used according to driving style are Power mode, which delivers powerful acceleration when needed, and Eco mode which prioritizes economic and environmentally friendly driving. These seven driving modes ensure a comfortable, enjoyable driving experience along with safety and peace of mind.

The all-new Outlander is equipped with evolved MI-PILOT7 single-lane driver assistance technology for highways. The control system integrates Adaptive Cruise Control (ACC) and Lane Keep Assist (LKA) to assist the driver in maintaining distance between vehicles while keeping in the center of the lane. It also detects speed limit signs and automatically adjusts the set speed accordingly. MI-PILOT with Navi-link utilizes map data to automatically adjust vehicle speed as needed according to curves, forks, and other circumstances on expressways. Also, the vehicle can automatically start within about 30 seconds of stopping in traffic, alleviating fatigue on the expressway.

Mitsubishi Connect is adopted for more safety, security and comfort behind the wheel. User can easily access emergency assistance, check the travelable distance of the drive battery, set charging times and alerts to avoid forgetting to charge, and display the positioning of a parked vehicle on smartphone app maps to see where it is located. Mitsubishi Connect also has a parental control function that sends notifications of vehicle driving status.

Based on the bold expressions of functionality with which MMC has designed its SUVs over the years, the company developed the all-new Outlander under its new design concept — Bold Stride — which expresses a bold, fixating presence with a solid stance and dependability for drivers to take a new step forward.

On the front, MMC has evolved the Dynamic Shield for a new generation to create a front-end design with a sense of presence. Seen from the side, the large-diametre 20-inch wheels along with the muscular fender flares that house them combine with D-pillars inspired by the vertical tail of airplanes and a floating roof to conjure an image of powerful yet crisp road performance. The rear side of the all-new Outlander features tailgate design comprised of a hexagon motif, and the horizontally themed tail lights that extend to both edges create a styling that accentuates wideness and stability. Body colour can be selected from a total of 10 colours including the vivid, crystalline, high brightness Diamond Color series – Red Diamond, White Diamond, and the new Black Diamond (varies by market).

Inside, the horizontally sculpted instrument panel makes it easy to understand the position of the car while driving, and expresses robustness and a feeling of spaciousness. The center console is designed to project a broad high-class presence. Finely textured soft padding that is pleasing to the touch can be found all over the interior, with stitching added for a high-quality feel. Based on the Mitsubishi Touch approach, the monitors and gauges are designed to be reassuringly easy to see, while the selectors, dials and switches are designed to provide a confident grip and operation, resulting in a quality feel that appeals to the senses.

Canadian pricing and trim levels will be announced in 2022.

1. Sold as Airtrek in Japan

6. Brake pedal must be used when stronger deceleration is required or when stopping the car.

Mitsubishi Motors Corporation (TSE:7211), MMC—a member of the Alliance with Renault and Nissan—, is a global automobile company based in Tokyo, Japan, which has more than 30,000 employees and a global footprint with production facilities in Japan, Thailand, Indonesia, mainland China, the Philippines, Viet Nam and Russia. MMC has a competitive edge in SUVs, pickup trucks and plug-in hybrid electric vehicles, and appeals to ambitious drivers willing to challenge convention and embrace innovation. Since the production of our first vehicle more than a century ago, MMC has been a leader in electrification—launched the i-MiEV –the world’s first mass-produced electric vehicle in 2009, followed by the Outlander PHEV –the world’s first plug-in hybrid electric SUV in 2013. MMC announced a three-year business plan in July 2020 to introduce more competitive and cutting-edge models, including the Eclipse Cross PHEV (PHEV model), the all-new Outlander and the all-new Triton/L200.

For more information on MMC, please visit the company’s website at